Build a Neural Network with Julia

If you’re reading this, I assume you are already motivated to learn how a neural network actually works. They are relevant and powerful tools, so the sell shouldn’t be too difficult anyway. There are many other excellent guides out there that I will link to below. If you find any mistakes or have comments, please email me or comment on this post.

I implement a feedforward, fully-connected neural network1 with stochastic gradient descent in the Julia programming language (terms are defined below). There are two main advantages of this setup:

Note, this is for educational purposes only: it is (hopefully) optimized for readability rather than speed or scalability. For a production grade neural network in Julia, check out Flux.jl.

The full code is available here:

The goal of a neural network is to approximate a function, \(f(x)\), such that it is wrong as little as possible when it sees new data. We start with a training dataset containing \(N\) observations of \(k\) features (aka covariates), as well as \(N\) observations of some outcome that we will try to predict. For this exercise, I will ignore any use of a test dataset to focus on the math of the neural network.

We can conveniently store the features in an \(N\times k\) matrix called \(X\), and similarly store the outcomes in a matrix \(Y\). Thus, a length-\(k\) horizontal row vector \(x_i\) describes the features for observation \(i\) (for example, this could be a specific house, person, photo, or document depending on your data).

Visually, we can imagine this as follows:

Together, the neural network acts to:

Visually, we can represent the network as follows. 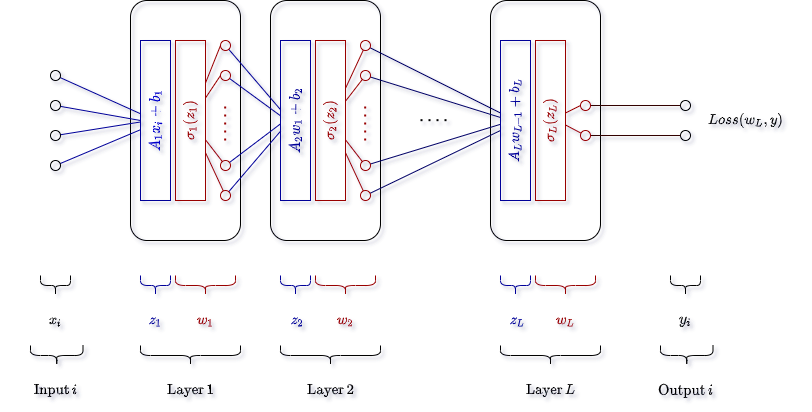 Note, this diagram is a bit different than the diagrams often shown. For me, this is more useful as it helps to internalize the fact that each layer is only performing basic math operations during the forward steps - no magic. Again, each layer will receive a vector of input, calculate a linear transformation (which returns another vector of possibly different length), pass each element of the new vector into a non-linear “activation” function, and then output that result to the next layer until there are no more layers.

We apply a non-linear “activation” function to the result of the linear transformation in order to allow the neural network to capture non-linear relationships. Conceptually, it is that simple.

In this case, the activation function is applied element-wise to the linear transformation step, i.e.:

Without the activation function, \(\sigma\), the resulting series of linear tranasformations could be simplified to just a single simple linear transformation: we would never be able to fit more complex relationships. To convince youself this is true, consider the following example of a hypothetical three (3) layer network without an activation function:

Where we let \(A_s = A_3 A_2 A_1\) and \(b_s = A_3 A_2 b_1 + A_3 b_2 + b_3\). This simplification will hopefully convince you that an \(L\) layer neural network without a non-linear activation function applied to each of the layers will ultimately reduce to the mathematical equilivant of a single linear transformation.

If you need additional convincing, this Julia code will reproduce the above relationship:

How do we evaluate success? Our neural network produces some output, and we may want to know how good that output is. You will hear this concept referred to as, equivalently, loss, cost, or objective functions.

The idea is simple: provide a way to quantify how good our model fits the data. In practice, this involves penalizing deviations from the true labeled results. If our model guesses the answer should be 0.21 when we know the answer is 1, we want the loss (cost) to be larger than if it had guessed 0.85.

In this write-up, I use the mean-squared-error loss function (largely due to the symmetry with standard OLS regression). There are other resources with great primers on other common loss functions, so I won’t cover it here. The important part is that we want to minimize the loss - and to do that we use calculus.

Once we have made a guess at what the answer should be, \(w_L\), we compare it to the target output \(y_i\) and realize it may not be exactly correct. In this case our cost (loss) function \(C\) will produce a larger value than we want. How do we adjust the numbers in each layer’s weight matrix \(A_l\) and “bias”3 vector \(b_l\), such that the value of loss function will decrease i.e. our predicted output will be closer to the target output? We take derivatives.

In math, what we want to know is this: what is the partial derivative of the loss function with respect to each of the numbers I can control i.e. the elements of each weight matrix \(A_l\) and the bias vectors \(b_l\). Put another way, we want to find:

For each layer \(l \in [1, L]\). Important note: I will take some liberties with notation here to avoid additional superscripts and/or subscripts. Technically, a partial derivative must be taken with respect to a specific element, for example, \(\frac{\partial C}{\partial a_{ij}^l}\) for \(a_{ij}^l \in A_l\). In this case, I use notation that represents a “partial derivative of the cost function with respect to each of the elements of \(A_l\) and \(b_l\) in a layer”. Thus, the result of these family of derivatives I show will be vectors and matrices, rather than scalars.

To do so, we use a technique commonly called “backpropagation”, and also known as “reverse mode differentiation”.4 In short, rather than start from the input value and start chaining deravitives until you get to the output, we start with the output and work backwards to the input. This way, in one pass, we find all the relevant deravitives we care about. Check out the footnote in this paragraph for an excellent introduction to the concept.

Thus, starting with the last layer, we find deravitives:

It’s important to remember that we pick the relevant functions. So, for example, if we use a variant of the mean square error cost (loss) function we find

Note that when our target \(y_i\) is a vector instead of a scalar (e.g. for a categorical problem), we often choose a method of aggregating the losses for each element of that vector. In the Google framework Tensorflow, for example, they call this a reduction.5 The main reason for this is that it simplifies the math and calculations significantly. This simplification only applies to the reported “cost” (loss) value itself, not the derivative, however, which can remain a vector.

We can calculate the other necessary partial derivatives as well.

We can now put these values together to find our first relevant gradients (rearranging to fit the necessary geometry for matrix algebra):

More generally, using the chain rule, we can calculate the gradient for any layer as follows:

Actual implementations of these calculations can be found in the code below.

Once we calculate how each of the numbers in our weights and biases impact the ultimate cost function, we need to decide how to update them such that the overall cost will decrease next time. For this, we use gradient descent. You may recall that the gradient points in the positive direction of maximum slope i.e. the gradient tells us, for a particular point in the space, which direction will a given change have the maximum impact. Since we are trying to minimize the cost function, we want to move in the negative direction of the same gradient vector: hence, gradient descent.

Since the gradient of the cost function is defined for the entire sample of \(N\) observations, in theory, we should have to do a forward pass of each data point in order to calculate the “true” loss. For large datasets, which we need for this type of machine learning, this becomes infeasible as you would need thousands and thousands of passes through the dataset.

Stochastic gradient descent is a heuristic solutions to this problem. Rather than calcualte the gradient of the cost function over the entire (training) dataset, we sample from our data and calculate the gradient over that subsample. This subsample can be as small as a single observation, and often isn’t more than 32 rows of data (i.e. observations).

Once we have our gradient, we update the weights according to some rule. The simplest takes the form:

Where \(u_{t+1}\) is the updated weight or bias, \(\eta\) acts as a scale for the update and is referred to as the step size or learning rate, and \(\nabla C(u_t)\) is the (stochastic) gradient of the cost function evaluated at the original point \(u_t\). To solidify this concept, we can imagine the gradient of the cost function looks something like:

Recalling, that the partial derivatives are calculated as above for each of the elements in the weight matricies \(A_l\) and bias vectors \(b_l\) for \(l \in [1, L]\). This is to say that, practically, we are calculating these elements backward from the last layer to the first layer

We can implement the above with the Julia programming language. Ultimately, our goal is to call a neural network with the following interface:

First, we define a new “struct” in Julia, called Network:

Next, we define a new struct for each Layer:

Besides that, we set all of the “cache” values equal to zeros, since they will be calculated in due time.

For each step, we need to make a forward pass of the network, which is a fancy way of saying we need to take an input \(x\) and transform it to an output \(w_L\).

This code should be pretty simple: starting with the input, for each layer in the network, calculate the linear transformation \(z = Ax + b\), the activated transformation \(w = \sigma(z)\), and then use the previous layer’s output as input to the next layer.

Based on our understanding with the big picture above, backpropagation is perhaps more aptly named “calculate partial derivatives”. One key note is that we will keep a running total of the partial derivatives for each input until we are ready to actually use them to update the weights and bias. The batch size of our stochastic gradient descent will tell us how many inputs the network will “see” before updating the weights.

Putting it all together, our stochastic gradient descent step breaks the input data into separate batches, and performs the forward pass, the backpropagation, and updates the weights according to the batch size. Together, we see:

And note that each update step on the network adjusts the weights and biases as follows:

That concludes the basics. The full code is available here:

For me, the key takeaways from this exercise are:

The implications of this are to consider when a neural network is the right tool for the job, and when it might not be.

For example, I suspect many people would be uneasy with the Federal Reserve setting the interest rate based on predictions from a neural network. Rather, Reserve Bank presidents and their teams of researchers have an (implicit or explicit) responsibilty to explain to congress, and the American people, why they made their decision. Much effort goes into these written and verbal explainations, and much effort occurs behind the scenes to estimate the implications of their decisions through the lens of cause and effect.

Alternatively, a neural network’s tremendous power at fitting patterns in data is perfectly geared to other problems, for example, image recognition for a search engine, or foreign language translation. In these cases, there is much less emphasis on why and much more emphasis on what or which.

Thus, these different questions we ask ourselves may require different tools: in some cases, prediction alone may not be all that we are after.